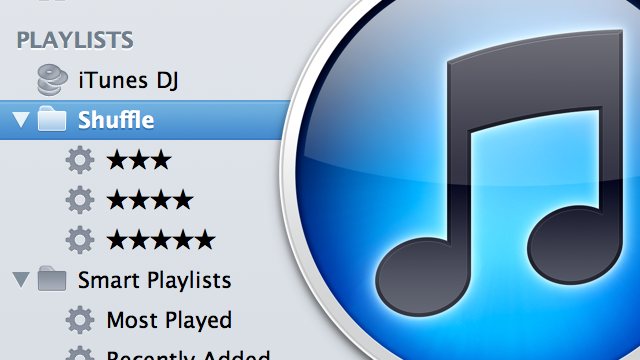 I have problem: I love listening to music, but I hate picking music to listen to. In a perfect world, I could press play and listen to music I like all day. Services like Pandora get really close. The only problem is that I don’t enjoy listening to new music all the time.

A couple months ago, a Hacker News comment suggested a way to avoid hearing the same songs over and over again while shuffling. I thought it might solve my problem, so I set up three smart playlists and grouped them into a folder:

I’ve been listening to it every day since then and I love it. I did have to tune the delays a little. I was hearing 5-star songs too often and 4-star songs not often enough, so I changed the rules from 1 day / 1 week / 1 month to 3 days / 9 days / 27 days. With that setup, I get about six hours of music to listen to every day, which is perfect for me. You may need different delays; my library is pretty small — only 618 songs.

Obviously this only works if you’ve rated a substantial number of the songs in your library. I use the following rating system, which is why I completely ignore 1- and 2-star songs:

This system has the neat side effect of conveniently confirming your ratings. If you’re sick of hearing a song, just bump its rating down a star. If you haven’t heard enough of it, push the rating up. (I recommend I Love Stars for quickly rating songs.)