Upgrade to a multi-screen battlestation 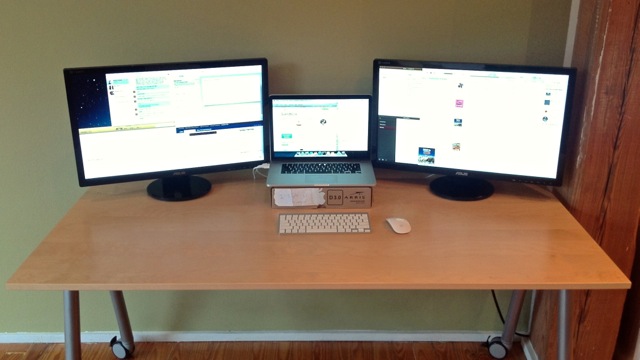 Up until a month ago, I hated multiple-monitor setups. Instead, I preferred one large high-resolution monitor, for two main reasons: Most software, like Windows 7’s Aero Snap and OS X’s Mission Control, works better with only one display; and I kept my workstations in sync by hauling my laptop to and from work everyday. My desk at work looked exactly like the one at home — same monitor, mouse, and keyboard. I kept my laptop shut and plugged into an external monitor in both places.

That changed recently, though, when I moved from Austin to Dallas. Now that I telecommute every day, I can have one permanent workstation at home and not worry about lugging my laptop around. So that’s exactly what I did. I took my two identical monitors and flanked my laptop with them. I quickly grew to love it.

It’s hard to overstate the utility of having enough screen real estate to display everything at once. Especially things that stay the same most of the time, like email, chat, and to-do lists. Turning my head a couple inches is a lot easier than switching between a bunch of open apps. It also helps keep me focused by keeping relevant information like documentation visible while I work.

Moving tackled one of the reasons I avoided multiple monitors in the past, but what about the software? Mission Control still frustrates me occasionally, but Moom helps reign it in. With it I can exactly position every window to maximize the usefulness of my screens. It’s the only utility I need to make my setup a dream.

I’m surprised it took me so long to join the ranks of multiple-monitor developers like Mark Pilgrim and Jeff Atwood. I’ve got a ways to go before I can hold a candle to the folks in /r/battlestations, but I don’t think I’ll ever go back.

If you’re curious about what hardware I’m running, read on.

Having the high desnity Retina screen side-by-side with low-density screens makes testing a piece of cake. I agree with Marco that web designers “really, really need to get a Retina MacBook Pro”. Surrounding it with regular displays lets you test 2X and 1X versions without using a different device.