Update: Twitter Bootstrap (version 2.0.3 and above) natively supports dropdown menus in collapsed navbars. It was fixed in pull request 2907 by Bryan Petty. This Gist shows a complete example.

A few weeks ago, I rebuilt Famigo’s website with the Twitter Bootstrap. Overall, we are very happy with the results. We noticed a little problem, though: our login link and user dropdown got lost in the shuffle.

You may think finding the login link on that page is pretty bad. Well, you ain’t seen nothin’ yet. This is what our home page looked like on a mobile device:

Can you figure out how to log in on that page? Most of our users couldn’t either. (Hint: click on the triple bar icon in the top right, then click “Log in”.) Since about 70% of our visits come from mobile browsers, its important to make it easy for them to log in.

So I did the obvious: I made the link into a colorful, always-visible button nestled in the right side of the navbar. I did the same thing for the user dropdown.

That was good, but there was a problem: the dropdown automatically expanded when the viewport got too narrow. Normally, this is a good thing. It allows you to put dropdowns in your navbar and have them collapse nicely. I didn’t want them to collapse, though, and moving them out of the nav-collapse element didn’t work. 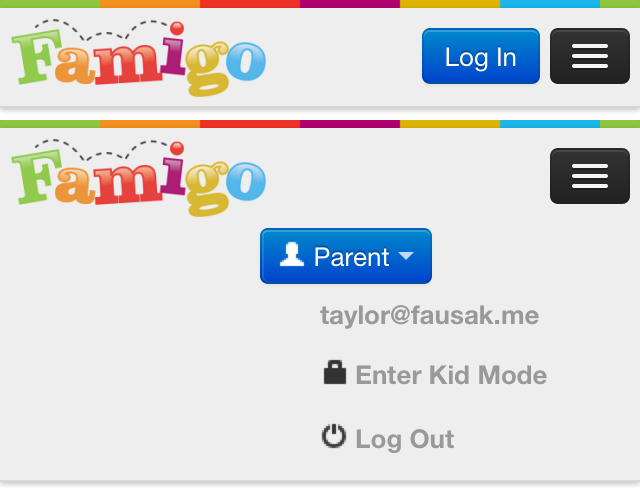 I scoured the documentation for a way to prevent dropdowns in navbars from collapsing. No luck. Then I turned to the issue tracker to see if anyone had filed a bug. No luck. Then I looked on Stack Overflow for someone trying to do this. No luck. Finally, I decided I’d have to roll my own solution.

After poking around WebKit’s inspector and the bootstrap source, I found three ways to do this:

Before I get into these implementations, this is how they’ll look when they’re done:

This method requires changing the least code. When creating a dropdown menu in a navbar, just add data-no-collapse="true" to the dropdown-menu element. For instance:

Then change nine lines in bootstrap-responsive.css that refer to dropdown-menu. Add :not([data-no-collapse="true"]) to the dropdown-menu selectors. For example:

Ultimately, I used this approach for Famigo since all versions of Internet Explorer account for less than 3% of our visits.

This method requires changing a little more code, but it doesn’t use any fancy CSS selectors. Instead of adding a data attribute, just change the class from dropdown-menu to dropdown-menu-no-collapse. For example:

Then change all the lines in bootstrap.css that refer to dropdown-menu. Copy the entire selector, then replace the second instance of dropdown-menu with dropdown-menu-no-collapse. For instance:

This approach is a little less clean than the first, but works in more browsers. If supporting Internet Explorer is important for you, this is probably the way to go.

This is the only method that doesn’t require changing any of the bootstrap CSS. To get started with it, add the no-collapse class to any dropdown-menu that shouldn’t collapse.

Now, the hard part. Either in a separate CSS file that gets loaded after bootstrap-responsive.css or inline CSS, manually override all the responsive dropdown styles. I created a Gist that shows everything needed. Here’s a snippet:

As you can see, it’s a bit ungainly. And it’s very brittle — any change to the bootstrap means you’ll have to go back and make sure all these values are correct. You should only use this method if you can’t (or don’t want to) modify the bootstrap’s CSS files.